Apple is vastly outperforming other tech giants, whose shares have cratered this year.

It’s been one blow after another for Apple in recent months. Labor unrest and production halts at Foxconn Technology Group’s massive iPhone plant in central China are expected to cause Apple to miss out on the sale of millions of the devices this holiday season, the company’s most important time of the year.

Most economists predict that a global recession will take hold next year, reducing consumer appetite for the expensive devices Apple sells.

As central banks rapidly raise interest rates to bring inflation to heel, technology stocks have especially fallen out of favor. Apple stock this year has lost nearly $800 billion, or about a fourth of its market value.

At the same time, Apple is under increasing antitrust scrutiny for its App Store practices.

In the European Union, the company is preparing to allow apps from other sources on its iPhones and iPads to comply with strict EU requirements coming in 2024, Bloomberg News has reported.

That development could inspire the US and other countries to follow the EU’s lead, threatening to take a bite out of the $23 billion in revenue that analysts estimate the App Store will generate in the company’s current fiscal year, which ends in September.

That’s a lot of bad news. And yet, in the stock market as of Dec. 16, Apple is vastly outperforming other tech giants, whose shares have cratered this year. 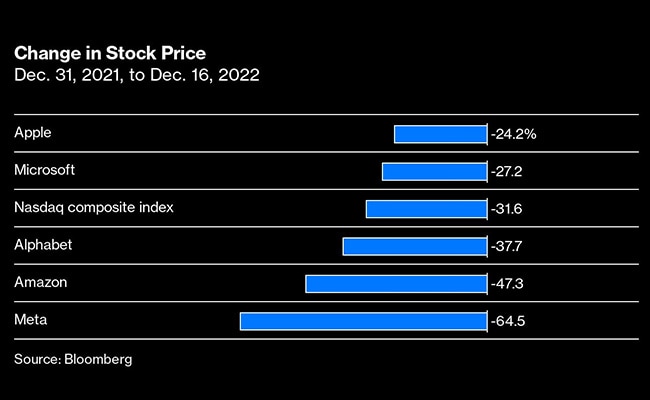 While Apple has declined 24 per cent, Meta Platforms Inc. has lost 64 per cent of its value and Amazon.com Inc. is down 47 per cent.

The explanation for Apple’s performance begins with its immense profits.

Apple is the world’s most valuable company, sporting a $2.1 trillion market value, so it’s hardly a surprise that it churns out more profit than any other business in the S&P 500.

Where it really distinguishes itself in the minds of investors is what it does with those earnings.

In the past five years, the company has generated $454 billion in cash from operations. Rather than plow those profits into acquisitions of marquee companies, Apple has returned all that cash—and then some—to shareholders in the form of stock buybacks and dividends. 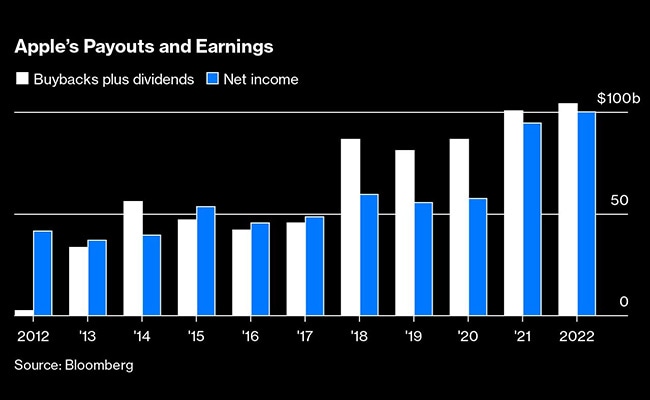 “Apple could have done all the things that the bankers wanted them to do—buy Netflix, buy Disney,” says Kimberly Forrest, founder and chief investment officer at Bokeh Capital Partners LLC, an asset management company that owns Apple shares. “Instead, they’ve been disciplined and returned shareholder capital, and they’ve been rewarded for it.”

Although 2023 earnings estimates for the tech sector have been dropping, Wall Street analysts project a 2 per cent increase in Apple’s profit.

Combined earnings for tech companies in the S&P 500 are expected to fall almost 2 per cent, according to Bloomberg Intelligence.

Apple’s loyal customer base is also a factor.

There are more than a billion iPhone devices in use, with many customers owning other products in the Apple family including iPads, Mac computers and watches.

When combined with an increasing number of services, such as cloud storage and apps tied to those devices, Apple has what’s known as a “sticky” platform.

“Once you’ve purchased a number of Apple products and services, and they all work together, it’s hard to unplug yourself,” says Jason Benowitz, senior portfolio manager at Roosevelt Investment Group LLC, which owns Apple shares.

“People don’t switch to Android because they can’t get the iPhone this month. They’ll wait a month. That behavior isn’t going to change.”

Apple has also benefited from expectations that its affluent customers are in a better position to continue paying for its products even during a recession, Benowitz says.

Those assumptions are being put to the test. Bloomberg News has reported that the labor unrest at Foxconn’s assembly plant in Zhengzhou is likely to result in a production shortfall of almost 6 million iPhone Pro units this year.

Others are even more pessimistic, with Ming-Chi Kuo, an influential analyst at TF International Securities Group Ltd., predicting that Apple could face a shortfall of as many as 20 million iPhone 14 Pro and Pro Max devices in the holiday quarter.

He also warned that demand for the devices, which can cost as much as $1,599, is at risk of disappearing in a slowing economy.

Foxconn said on Dec. 15 that it’s easing most anti-Covid-19 restrictions at its Zhengzhou factory, where most iPhone Pro devices are assembled.

To squelch a Covid outbreak and keep production going, the company had forced workers to spend weeks living in isolation with only meager food rations, causing violent protests.

Labor disruptions have been “brought under control,” and the plant is gradually moving toward restoring production capacity to normal, Foxconn has said.

But the sudden reversal of China’s Covid Zero policies could cause yet more interruptions, with the number of cases and hospitalizations surging.

Apple has its skeptics. Michael Lippert, vice president and portfolio manager at the Baron Opportunity Fund, sees an overvalued tech giant whose days of rapid growth and groundbreaking innovations are past.

“When was the last time, seriously, they’ve made an amazing innovation since the iPhone?” Lippert asks. “It just gets slightly better” with each new release, he says.

Apple’s performance this year shows that many investors disagree. They’re willing to pay more for a massive company whose profits are expected to be immune from an economic slowdown, says Sameer Bhasin, a principal at Value Point Capital.

“They have a monopoly on 15% of the world’s richest population,” he says. “In this market where you have a lock on that customer base, I don’t know what other company has that.”