Check out the video teaser down below: 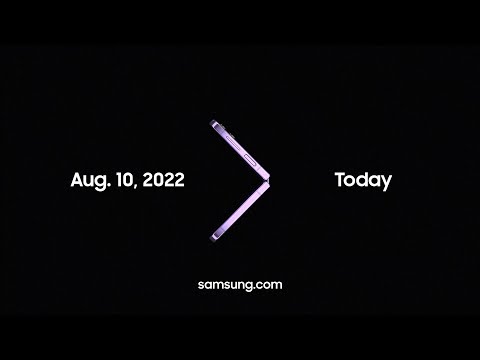 Samsung has confirmed that Galaxy Unpacked event will happen on August 10, where it will be launching a next-gen Galaxy Watch 5 Series along with foldable smartphones.

According to previous leaks, Samsung Galaxy Z Fold 4 will come with an updated design, being smaller and lighter. The device will feature a thinner single hinge design, unlike the previous models which will make it slimmer yet just as strong as its predecessor.

The interior display of the Samsung Galaxy Z Fold 4 will measure 7.6 inches with a 120Hz refresh rate. According to rumors, the device has an under-display fingerprint sensor. The camera of the Galaxy Z Fold 4 has a 10-megapixel telephoto sensor with 3x optical zoom, a 50-megapixel wide-angle, and a 12-megapixel ultra-wide camera.

Samsung Galaxy Z Flip 4, on the other hand, has a 6.7-inch display with a larger 2-inch cover display. This device folds vertically unlike the Z Fold which folds horizontally. Both devices are expected to have a Qualcomm Snapdragon 8+ Gen1 processor with 12GB RAM and internal storage of 512GB.

As mentioned earlier, Samsung Galaxy Unpacked event will happen on August 10 at 9:00 a.m. EST (6:00 p.m. Pakistan time). The South Korean giant will start accepting pre-orders for the Galaxy Z Fold 4 and the Galaxy Z Flip 4 smartphones soon. Updates about other features, prices, and availability dates will be revealed at the event.